Tricia Alexander’s dreams are haunted by a mystery lover. When she discovers the man she met in a nightclub is from another planet, will she accept his story or kick him out?

Brock was young Tricia’s imaginary friend and confidant, and watched her grow up over the years. After gaining permission from the leaders of his planet, he sought to bond with her twice before, but with little results. When he’s given a final chance, will he succeed? Or will a family crisis prove too much?

4 Stars:) “Tricia and Brock’s interaction was great. The meeting of each of them with their families was interesting. I was rooting for Brock, LOL. The world building in Hearts Last Chance was believable and stayed true to the characters. I will definitely be interested in Book 2.”  To read the full review, click the link below:
http://www.amazon.com/Hearts-Last-Chance-Chosen-Book-ebook/product-reviews/B00NDZK64O

3.5 hearts:) “I enjoyed this paranormal romance story. This is a fast-paced story that is filled with action, and a lot of hot and steamy sexual encounters between the two main characters.” To read the full review, go here:
http://reviews.theromancestudio.info/2014/11/20/hearts-last-chance-by-kenzie-michaels/ 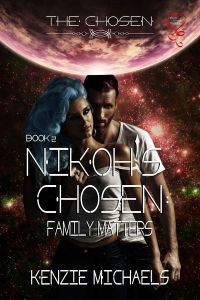 Still mourning the tragic death of his beautiful mate, could another Chosen one already be waiting for NiKoh SiLah? To avoid what he’s not ready to accept, he throws himself into his work at Planet Security.

Leaving the Academy behind to follow her dream of working with animals, GiNae SoJae returns home. Preoccupied with work and not ready to take a mate, she’s horrified when her body enters Maturity. GiNae fights the changes occurring within her. But during nightly dreams she cannot control, an unknown man teaches her the secrets of her body.

Will NiKoh and GiNae succumb to the paths they think have been chosen for them or will they discover the true Chosen life that awaits them?

Both books are now in PRINT!

“Unintentionally, everyone that lives under NiKoh’s roof, which includes GiNae and her mother ViShe who is Nikoh’s housekeeper, are like family. Even when ViShe tries to stick to propriety, they all have lived at the same location for sixteen years so it’s hard not think of one another after the changes around them begin. In addition, I really liked OkVei (NiKoh’s son) and GiNae’s friendship. It gave this novel another dynamic viewpoint that you had to admire.

I recommend this novel to those who are fans of Ms. Michaels and/or this series!”

“The story shows how family support one another in their time of need and confusion. Just love the twist that came about with the chosen mate’s couples and how they made it on their journey
OVERALL IMPRESSION OF THE BOOK
This is a must read book”

Book #3, Best of Both Worlds 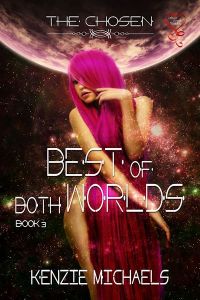 No stranger to controversy, SaLie SiLah is offered a position on the newly opened Tri-Xa space station. Expecting to further her relationship with the father of her child, SaLie learns she will be working closely with her childhood sweetheart. Will her eyes be opened to the fact love has been within her reach this entire time?
Dr. JeTil PaHej thought SaLie was his Chosen when they were seniors at the Academy, but he hadn’t counted on her infatuation with the Xaxonian commander of the new space station. When he learns SaLie will be joining him on the medical team, he forms an unlikely alliance with DuKah, in order to win his woman back. Will the ploy work, or will the deception turn her against both men?
Now available in print:)
Amazon
Book #4, Kira’s Slice of Pizza

Leaving TriJupe to escape scandal after the death of her Bond Mate, KiRah exiles herself on Earth and takes refuge in an abandoned house to paint and mourn her loss. But when a stranger brings upheaval to her new life, will KiRah discover it’s possible to love again?

Duffy Switzer never thought he’d be interested in an artist. Kira’s quiet demeaner proves refreshing after a string of self-centered women, and having someone who makes no demands leads him to believe he’s found the perfect woman. But as he’s drawn deeper into Kira’s life, he learns she is no ordinary human. When the truth is revealed, will he turn his back on her?

I Heart Book Publishing
Best of Both World’s cover is also included in an Adult Coloring Book: 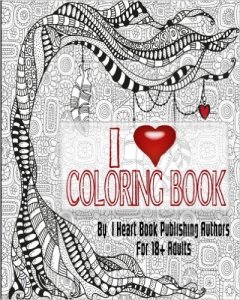