I blogged about my Prologue Views last year.  In case it doesn’t cover this year’s topic, it can be helpful when you can’t find a way to show more backstory to your characters.

The rule in general is, if you’re going to have a prologue, there had better be an epilogue.  I think one of my books has an epilogue, but no prologue; not sure how I got around that rule!

What is it about me that only my family understands?

I’ve been thinking about this one ever since I saw the topic.  It certainly isn’t my love of chocolate, or pasta, or the fact that when inspiration hits, you nearly have to bludgeon me over the head to get my attention (or just shut off the electricity/unplug the wifi….but this will also probably cause a meltdown!).

I can’t think of a single thing I do that only my family would understand.

Even two years ago, I amazed my mother when I wrote a short story during the commercial breaks while watching Jeopardy and Survivor….then finished it an ninety minutes later.  When I read it to her, she shook her head and said, “It’s fascinating how your brain works.”

See?  My own family doesn’t understand it.

My hubby calls my karaoke habit my ‘mid-life crisis’, so when I turned 50, I dyed my hair blue to show him a ‘mid-life crisis’.  Well, the joke was on me, because I discovered I LIKED my blue streaks!  Just wish I could afford them all year round….but then again, it’s rather torturous to wash my hair in barely-warm water (it makes the dye last longer), so I’m perfectly happy with them two-three times a year.  If I could afford to go to the beauty shop every week like my own grandma did (just for a wash every week, then cut and curl as needed), I might even try new colors.

Update On The Job:

Earned my official vest uniform on Saturday!  Guess my boss is happy with me:)  I’m simply thrilled to wear normal clothes again, instead of ensuring I have pockets for my pens, notebook, chap stick, and extra kleenex!  Now my only pet peeve is, the vests are red, which means I can’t wear pink, green, or any other clashing color.  Yes, this is just Me being Me…..

Anyone besides me remember that late 70s BK commercial?

Is having a somewhat of a good memory count as an ‘odd, useless talent’?  I don’t exactly hide it, but neither do I go to great lengths to share it.  It simply comes out in casual conversation, or when we happen to be playing certain games.

My favorite board game is Trivial Pursuit, and in college, we’d have games that went on for days, until one of us finally won.  I also love to play Lunchtime Trivia at Buffalo Wild Wings.

Remember Schoolhouse Rock?  I loved those segments every Saturday, looking forward especially to ‘Three Is A Magic Number’, ‘A Noun is a Person, Place, or Thing’, and “Rockin’ and a-rollin’, splishin’ and a-splashin’, look over the horizon and what do we see?  Looks like it’s going to be a free country…”

I never thought those jingles would ever come in handy….but that’s how I still remember my multiplication tables and some history….especially when it came to my 11th grade History.

We’d been learning about the Constitution, and when Mr. H told us to pull out a piece of paper and write the Preamble as a quiz, I realized I’d learned the jingle!  So I proceeded to sing it under my breath (so I thought, anyway!) as I wrote, and smiled in satisfaction when being one of the first to finish.

After class, Mr. H stopped me.

“What were you singing during the quiz?”

“You didn’t teach that to anyone, did you?”

I shrugged.  “If they paid attention to Schoolhouse Rock on Saturdays, then they know it too.”

I laughed all the way to my locker!

Another time, I was writing my 3rd book, Forbidden Love, which showcases both the 1986 and 87 Indianapolis 500.  I needed to know the slowest speed of a qualifying car for those years, so I called IMS to see if they could help me (I think this was before Google).  I ended up speaking with Donald Davidson, the IMS historian, and during our conversation, I mentioned remembering something about Dick Simon being the oldest driver in the field.  Donald looked it up, then commented that my memory was better than his; he’d forgotten that tidbit of trivia!

A long memory can also have it’s bad side.  For instance, I also remember nearly every painful moment of the years I spent at the bottom of the social pecking order, and every once in a while a painful glimpse will worm its way into a recollection, and I’ll cringe with shame and embarrassment all over again.

Remember Dumbledore’s Memory Cauldron, or whatever he called it?  Where he would place his memories so they wouldn’t clutter up his brain?  I wish I could banish some of my memories to that place.  Especially some of the more stupid stuff I’ve done over the years.

Warning:  Long post ahead.  Just could NOT find a way to shorten it up!

Several of you have heard me talk about my ‘Green House’ and my ‘Brown House’, that we are cleaning up. Both houses came with our mortgage, and we plan to tear down the Green House, and I plan to turn the front half of the Brown one into my office/library.

THIS is a prime example of Hoarding:

This is the back room of our Green House, when we first went in to start getting rid of junk that the hoarder who owned the property had crammed in here. 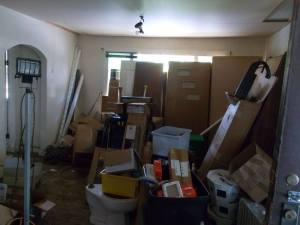 Front room of the Brown House, right side, before we began sorting through it.

Hoarding:  Chaotic, organized or not, that takes over one’s home.

I’ve spent the past three years ‘helping’ my mother ‘clean out’ her own home, and after I realized we were mainly simply moving stuff from one room to the next, I began bringing some of it home to donate.  I’ve also realized I’ve inherited my mother’s ‘paper hoardering’ tendencies.

When I began cleaning out Mom’s massive piles of printed emails, catalogues, and sale papers, I at first would run everything past her….until I noticed a pattern of what she was okaying me to toss, and just started going through it on my own.  She even told me later she had to refrain from going through the trash bags, to ‘make sure’ I hadn’t thrown a forgotten card or letter away, but realized I was doing her a favor.  I told her the only emails I’d tossed were reminders of upcoming events which had already passed.

I also convinced my dad he didn’t HAVE to give Mom all the catalogs; he could simply throw them away!

I’ve been making a conscientious effort to curb my own paper-hoarding.  It helps that I only read TV Guide every two weeks, and we no longer take a newspaper.

Here’s an updated picture of our dilapidated Green House: 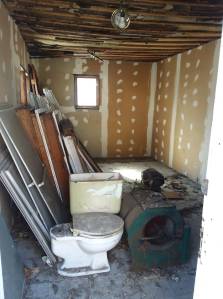 And the Brown House: 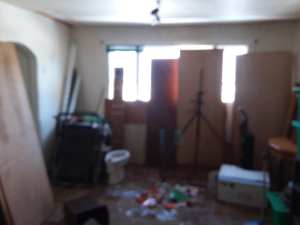 What do I collect?  I have a stamp collection that I started in my teens; now I only add to it whenever I get the specialty stamps at the post office (Elvis, Harry Potter, Christmas, Star Trek, etc).  Haven’t really added them to my album; ‘one of these days’ I’ll track them down in the lock box or dresser drawer and add them.

Music:  I still have my 45s, my LPs, and even a few 8-track cassettes, plus over 200 cassette tapes and 300 CDs.  As soon as I get the front room of that Brown House cleaned out, I’ll get all my musical items on shelves, in their storage containers, and start playing them again (as soon as I get a working record player!)

Books:  Surprise, surprise…..I own over 1300 print books (see pic).  That’s the number I discovered back in 2010, when I took complete inventory.  I’ve since added more titles plucked from our now-defunct used book store, plus the ones I’ve bought over the past 8 years.  This doesn’t count the E-books I’ve read over the past twelve years; I found the ziplock baggie of the ones I’d saved to floppy disc (remember those?)  Yeah, I need to go through them and get them transferred to a flash drive…..

Dolls:  My grandmother began buying me Madame Alexander dolls when I was two, and when my own mother passes, I’ll inherit her 30-doll collection.  Last year, my dad finally built a wonderful case so she could display her dollies, and I even found the sheet of paper where I’d written down all their ‘names’, including their ‘back stories’ from when I played with them in junior high, having been allowed access to them at the tender age of 10.  I also have some favorite stuffed animals downstairs in a rubbermaid tote, since they’re rather fragile.  My daughter is not interested in the dolls, but my hope is that my granddaughter will continue her love for them!

And yes, I have a ‘collection’ of old TV Guides, letters, cards, writing magazines, swag from conferences, and old notebooks filled with stories.  Some are published; some are partial WIPS.

But as long as I don’t let it get out of control, that doesn’t make me a hoarder, does it?

Except the books.  If you borrow one, I expect it back.

I did indeed manage to get myself hired, and so far it’s working out well.  I completed my computer training last night, and have discovered I rather like working in the Lumber section, as a cashier.  Tonight is my 3rd night training back there, and I have until Saturday to ‘master’ it, since I’m training with a friend of mine who moves into Head Cashier position Saturday morning.  So here’s hoping I remember which F keys to hit in the correct order!