-Fear that I’ll fail as a mom, and won’t be able to protect my kids

-Fear that any bad choices I’ve made will affect my children in negative ways.

As a wife who married a man in a lower income bracket that I grew up in, I’ve had a real fear of poverty, of empty cabinets, and at one time, a fear of being homeless.  My faith in God, as well as having a family with larger resources than myself, have helped me greatly with these.

As a writer, I’ve also had a fear of failure.

-Fear that no one will buy my books

-Fear of neglecting my family as I’m pursuing my dream

-Fear of success.  I know; this is a weird one, but I’ve had to overcome a few self-sabotage inclinations.  I’ve over-committed myself; forgotten deadlines; forgotten to write down important dates.

With the changing political culture, I now fear I’ll inadvertently offend someone.  I’ve managed to do it on FB more than once in the past several years.

I’m off this weekend; I’m looking forward to catching up on some shows I DVR’d last week while I was gone, and preparing for next week’s five day promotion streak.  I’ll be at the Indianapolis Christmas Gift and Hobby Show Wed-Sat, 3:30 pm-close, and on Sunday, up in Lafayette for an debut Author’s Fair.  I’m going to try to remember to post next week; after all, my mornings will be FREE!

So enjoy your weekend!  Friday night, I’ll be downtown at a friend’s art gallery during our 1st Friday Art Walk, then vegging out in front of the TV until it’s time to join my fellow choir members at church.  I’m also designing a CD cover for our Women’s Retreat next week (even though I can’t be there this year) and maybe making a dozen cookies or two.  Monday will be busy with picking up promo items and packing; next Tuesday I’m off to Lafayette to drop off some things at my parents’ house, so they won’t get stolen while I’m in Indy.  I plan to SLEEP all day Monday the 12th, ha ha!

What are my favorite apps?  It depends on which device I’m using.

I’m hooked on my Daily Challenge in Solitaire and Spider Solitaire.

When I’m in the mood, I binge-watch shows on Netflix.  So far I’ve watched Coach, Frasier, Star Trek DS9, and Criminal Minds.

Lately, I’ve been using my CBS app, since we can’t get local channels, so this is the only way I can watch Bull, Survivor, Criminal Minds, TBBT, Young Sheldon, Mom, and Murphy Brown.

I also use my kindle to read, and to check the weather, and keep up with facebook and gmail.

Messenger, if phone’s on the charger.

I keep up with FB when I’m not on the computer, and gmail.

Twitter every Thurs and Saturday nights, when I’m singing karaoke.

Instagram, when I remember.  Since getting the new phone, I’ve been slightly neglectful of this app.

Camera.  When I don’t have my actual camera handy.  Yes, I still have one of *those*!

So what’s YOUR favorite app?

I‘m traveling home from Lafayette today, then off to a large craft fair tomorrow.

My former Secret Cravings Publishing authors and I are in shock this week; we lost one of our own to a tragic fatal car accident.  Tamara Hoffa’s funeral is today in Tennessee, and I was fervently hoping it would be next week, when I could attend.  So I’ll be keeping her family and friends in my heart as they say goodbye to a terrific mom, wife, friend, and author.  I loved Tamara’s bear shifter stories; think I’ll honor her by rereading them.

Last week, we talked about epilogues.  Like ’em?  Hate ’em?  When to have one and why?

It’s the same argument with prologues.  If you have one, then you’d better have an epilogue.  So why have them at all?

The 1st time I came upon this rule was ten years ago.  I’d written my 1st novella, a short story which spilled out of me over the Fourth of July weekend.  I knew it was short; it also fit the word count criteria for an anthology a new friend suggested I submit something to.

It was ultimately rejected, but not because of the story; I’d not bothered to read the submission guidelines.  So I submitted it to another publisher, who offered me a conditional contract.  She wanted me to expand the story.  I spent two months adding chapters….then when we went to edits, my editor suggested a prologue, to show some more back story.

Since then, other books have been written, but I’ve gotten a little better at back story, and not just an info dump.  Some stories, however, there’s just no better way to start it off than a flashback to a traumatic event, or even a short intro to certain characters.  It just depends on the story.

To date, only 3 Kenzie books have the prologue/epilogue.  Of Molly’s, there’s only two.  So out of currently 19 (??…I’ve lost count!) books, only 5 have this somewhat ticklish issue.  So my scorecard’s not too bad.

What’s your take on it?

In other awesome news…..Whispers launches this weekend!  We have a small issue, however; we’ve not gotten the email on whether or not the books have shipped.  So we may be having a launch party without any books, lol….

That’s okay; we have proof copies to show off and read snippets from, and hopefully others will show up for our Open Mic Night and read their own creative works.  Here’s hoping for a fun night with friends and supporters!

Badass Fairies of the Wabash:

Trouble is brewing along the Wabash River.  A young fairy who’s recently released from Solitude, is rebelling against her new duties in the Three Bridges area.  When the High Council intervenes, will things improve?

Ciera is convinced her apartment is haunted by the ghost of her ex-boyfriend.  When she consults a medium, she is shocked to learn she has ghosts in her pottery studio as well.

Trevor is more than willing to help Ciera come to grips with her past.  Can he put his attraction aside to help an angry ghost with his unfinished business?

See you next week!

There was some discussion several years ago over the whole prologue/epilogue debate.  After you write your brilliant story and you want to jump forward in time or even foreshadow the next book (if writing a series), how do you do it?

Some people slap an Epilogue at the end.  Doesn’t have to be an entire chapter; sometimes it’s only a few paragraphs.

One editor told me you only have an epilogue if you have a prologue at the beginning.  Another editor told me it’s okay to have one at the end of the series if you want to give closure to it.

I’m on the fence about it.  I have 3 books with prologue/epilogues, and it was because I decided the story needed a little backstory first, then to show what happens a few years later.

What’s your take on it?

The Windy Hills Country Club, along with Harmony House, presents a four-course meal of romance for your reading pleasure! Join the members of these country clubs as Courtney, Amber, Natalie, and Cara find love in very unexpected places.

(Formally known as The Anderson Chronicles:  Appetite For Desire, All She Ever Wanted, Class Reunion, and Off The Clock) 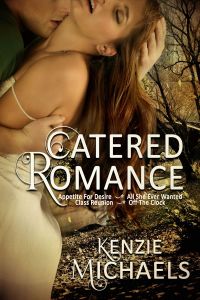 This week’s topic is another no-brainer.  What do I wear when I write?

Something I learned from FlyLady:  If you’re serious about working at home, wear shoes.  It literally tricks your brain into ‘work mode’.  I don’t know why.  It just does.  Let me clarify:  Shoes that TIE.  It won’t work with my slippers or my Crocs.  It has to be my New Balance tennies.

There is the odd time (such as now!) that I’m only wearing socks….but I ‘irritated’ my Achilles tendon, and I’m more comfy w/o the shoes at the moment.  Plus, it’s 87 degrees outside (in OCTOBER!), so yeah, I’m inclined to be barefoot.

On that note, I’m off to the Imaginarium Convention this weekend.  I’m on four panels:  Game of Thrones (I wanted to WATCH the panel, not be ON it, but we’ll see how this goes-I’ve not even watched the entire last season!); Blog Tour Strategies; Advice To New Writers; and Networking.  I’ll also be found at my table in the Expo hall.

So what do YOU wear when you’re writing?

See you next week!